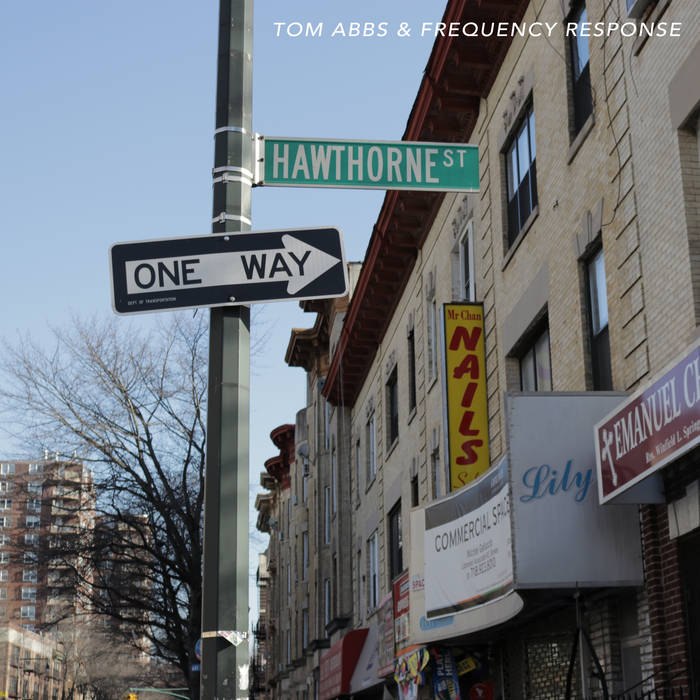 Tom Abbs returns with the 4th album in the Frequency Response series after a long hiatus. Entitled “Hawthorne” the album features cinematic soundscapes that touch on free jazz, new music composition and free bop. Featuring Chad Taylor (Chicago Underground) on drums, Jean Cook (Beauty Pill) on violin and Brian Settles (The Hook Up) on tenor saxophone, Abbs composed the enclosed music as an homage to his time living in the caribbean infused neighborhood of Lefferts Gardens in deep Brooklyn. Originally conceived in 2009 the initial recordings were set aside as unfinished until this year when the masters were salvaged and finally mixed for release.

The eleven pieces cover a wide range of texture and orchestration with Abbs underpinning each composition on one of a number of instruments including bass, tuba, cello and piano. Influences abound with each orchestration change ranging from Cecil Taylor to Afrobeat to the Art Ensemble. A melancholy spirit rings throughout reflecting the time and place in Abbs’ life living on Hawthorne Street including his kidney donation to painter M.P. Landis, the loss of family, career changes and the realization that after 20 years in New York City it may be time to seek a better life not constrained by the endless concrete of the city.

Shortly after these recording were made Abbs went on to found Northern Spy Records and move to the Catskill Mountains where he built Birdwatcher Studios. Abbs is a current member of the Andrew Lamb Trio, Hungry March Band and The Icebergs and has played on over 50 recordings.

Bandcamp Daily  your guide to the world of Bandcamp